Kenilworth School plan to conquer all comers in Canada next year with thanks to Elizabeth Davenport Estate Agents. April’s expedition is the biggest single Rugby and Football tour that Kenilworth’s only secondary school has ever undertaken. With a total of 56 children, many partaking in both disciplines, the need for parental and sponsored support is paramount. Two of the Directors of Elizabeth Davenport have a particular affinity for the School with Mark Walmsley having a daughter in Year 8 and Nick Luntley being a former pupil himself. “Having played and toured with both Rugby and Football for Kenilworth School, Mark and I approached George very quickly when we heard about the opportunity to purchase all of the sports kits for the pupils forthcoming trip to Canada” Nick commented.

Year 8’s football team have been very successful and sit currently as district league and cup champions whilst the Year 9 Rugby team are undefeated and have won the prestigious Solihull School Rugby 7’s tournament. “As Kenilworth’s only Secondary School and with the kids genuinely achieving so much success at both Rugby and Football at the moment raising the money for the tour is a massive ask. Pupils and staff are undertaking all kinds of fundraisers to support this trip of a lifetime and any support we can offer we are delighted to do so” Mark Walmsley said.

The purchase of Sports kits doesn’t come cheap with the quality having to be first class. Canterbury, who produce the British Lions and the England & Ireland Rugby kits, have been chosen as the supplier who despite being more expensive than most will hopefully offer the pupils an advantage when it counts. “The choice of kit is vital” stated Paul Flowers, “they’ve got to last, they’ve got stand the wear and the tear they’ll be put through. Our pupils are going to be representing our School as well as the Sponsors and they’re really going to look the part. We can’t wait to see them. They’re due in January so not long to wait!”

“We’ve got a lasting relationship with Kenilworth School now” stated Mark Walmsley. “Nick’s been working with Dave Peacey who used to teach him which is really full circle, and obviously my daughter’s a pupil now too. There will be opportunities for Netball, Athletics and Dancing events too so if we can give the support then we certainly will”.

With children at Finham Park School Elizabeth Davenport have also been supporting the local PTA with donations from completions sold in the Finham area. Every house sold by way of an introduction from parents or relatives at the school will see at £100 donation to this worthwhile cause. 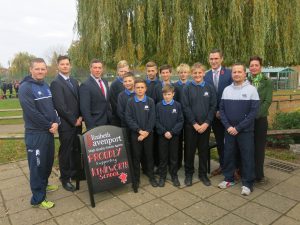